Sometimes, size can be an advantage

At a time when so many cell phones look so much alike, it’s good to find one that is different – especially when the differences translate to advantages.

The advantage for the Samsung Galaxy SIII is the form factor – wider and taller than most, yet thin and light.  I put one in my daughter Jacqueline’s hands, and after putting it through it’s paces for a few weeks, she said, “The size works for me.”  An avid Facebook user and text sender who has recently also gotten into Twitter, Jacqueline needs a phone that let’s her get her messages out quickly.  And the Galaxy SIII seems to fit the bill nicely – although she did say it’s a bit cumbersome to use one handed because her fingers can’t reach all the way across the screen.  That reminds of the pitch made by Apple on one of its iPhone 5 commercials.

Speaking of iPhone, the Galaxy SIII seems to emulate the iPhone more than most Google Android phones as well.  The single button stands out on the face below the large screen.  There are two buttons on the side of it – for menu and back; but they disappear when not in use.  The usual Google search button doesn’t exist. 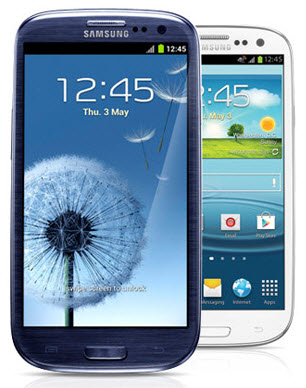 By hiding its hardware buttons, the Galaxy SIII gets an iPhone-like feel.

While I thought this iPhoney button configuration was interesting, it was a bit disconcerting looking for those disappearing buttons.  Jacqueline had to point out to me that they would appear when ready.

Using it on the AT&T Network worked as always – but with Google Voice getting flaking these days (for everybody I know who uses it), it was sometimes a bit difficult to make Internet calls (as opposed to cell network voice calls).  But the sound is crisp making it easy to hear the person on the other end.

The sound from the speaker can also get pretty loud compared to many smart phones.  That makes it useful for listening to music or YouTube videos in noisy environments.  (Don’t get me wrong; it’s still not hi fidelity, but being able to hear the speaker phone and tunes at a higher decibel level is a definite plus.

The camera has a number of features that you would typically expect to find on a point-&-shoot standalone digital camera, such as sports (3.3 shots per second for up to 8 images), candlelight and fireworks settings.  It also has a timer to allow you to delay your shot; but that feature would be better if the camera had a kickstand to hold the camera in shooting position.

Samsung did a good job of using a single LED status indicator for multiple functions – although it would likely take some time to figure it out and remember what all the light colors mean.  Blue means you have a Facebook post waiting for you; yellow for Snapchat; purple for email arrival; green for a waiting text message; red to let you know the phone is charging.  Don’t ask me how it determines which color to show when multiple conditions exist that would light it various colors.

The Galaxy SII also supports NFC (near field communications) which lets you share videos and appointments between phones easily.  We unfortunately didn’t have an opportunity to test that feature so far.

The only big downfall we found was needing

to occasionally remove the battery to reboot the phone when it gets confused – which happens too often, on some days several times.

All-in-all, the Galaxy SIII is well suited for people who want a phone that’s significantly larger than most smart phones yet much smaller than an iPad, and that has a feature rich camera.