Not all phone chargers are alike 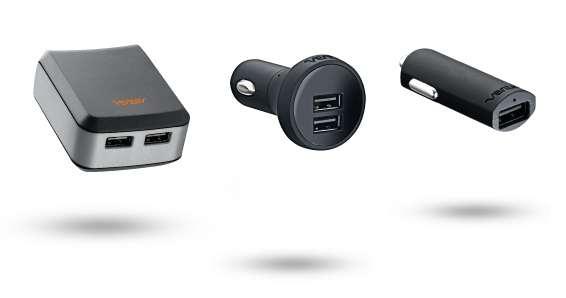 Different chargers for different needs. These three are from Ventev

Take sides all you want when you select your favorite mobile phone.  Whether you choose, iPhone, Android, Windows Phone or Blackberrry, they still have one thing in common: they need to be charged.  And most of us think of the charger as being incidental to the phone.  But if you want to optimize your experience, there’s more to the charging.

The first time you encounter a charging decision, it’s usually because you have lost your charger or frayed the cord.  Looking online or in the store, you’re face with dozens of chargers, adapters and accessories – and they all look alike at first glance.  So I spoke with Scott Franklin and Matt Irby, executives at Ventev, to understand how they differ.

Ventev has designed a full line of charge-related products.  Traditionally, sold under the AT&T name, this year they have released products under the Ventev brand as well.  As you get to see them side-by-side outside the case, and use them alternately, you can see the difference between them.

Among the decisions you need to make are:

And of course you need to have some idea of what type (and brand) of device you want to charge.  Not only does it matter because you need the right connector; but Mr. Franklin and Mr. Irby made me aware that the different devices charge at different rates, meaning that some chargers are better suited for some devices but not others.  For instance, 95% of Android devices charge at a reduced rate with Apple chargers – so it will take longer and be less efficient.

I have been using Ventev’s line of universal chargers to understand the process better.  They call their home chargers, “Wallport” and their car chargers, “Dashport”.  After noticing that the form factors differs (size, shape, and number of devices that can be charged concurrently), the next thing you should notice is that the descriptions are different, leading you to choose the right charger for your job.

The Wallport r2200 is a universal, rapid charger for 2 tablets or devices; while the Wallport e1100 is an ecocharger (“green-power”) for mobile devices.  That’s what they say on the labels.  In your decision process, think about it this way:

Similarly, the Dashport r2200 will charge two devices in your car as you drive, while the r1200 mini charges one.  They’re both universal rapid chargers.

As a user, I was impressed by the Dashports.  I threw the r2200 in my wife’s van, where we’re likely to need to charge two phones as we ride; and put the r1200 mini in my car where the tiny device is convenient and doesn’t take up lots of storage between charges.  I can ride across town with my phone plugged in – and arrive at the other side with enough charge to not worry about running out.

While the Wallports also do an admirable job plugged into the wall, I was unimpressed by the physical design of the r2200.  Depending on where you plug it in, it might block the adjacent wall outlet.  On the other hand, it can charge two iPads concurrently – something that most chargers cannot do.

Ventev chargers will cost you from $20 to $40 at various retail outlets and online.  Find out more at www.ventev.com.

This entry was posted in Cellular, Smart Phone and tagged accessories, accessory, charger. Bookmark the permalink.