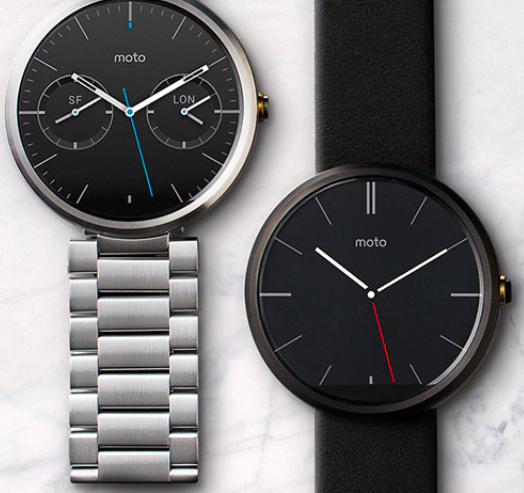 Moto 360 Smart Watch – pairs with Android; allows you to make your own custom fashion statement

Motorola calls the Moto 360 a “watch for our times”.  It’s certainly the first of only a few wrist watches to herald in the smart watch as more than a plastic device that shout “geeky” about the geeks who wear them.   In fact, in many ways, it’s fashionable.

Fashion Statements Defined By the Beholder

My high-school aged daughter and I shared the luxury of wearing the Moto 360 for a few weeks to see how it might work in varied social environments.

When Veronica wore it to school, her friends noticed it without her having to point it out – the bulkiness being what brought it to their attention.  Her fashion-oriented friends were taken back – because they were afraid it would condemn her as being part of the geeky unfashionable crowd.  But she says they forgave her when they saw some of the neat ways it worked.  The nerds, on the other hand, thought she was cool.

In my office, most people didn’t say much about it; but the few who noticed wanted to get a closer look and even wear it.  Unfortunately for most of them, it doesn’t pair with their iPhones – so the Android users got a special treat.

Since we’re talking fashion, the Moto 360 can be purchased with various bands, some leather, some metal, so when teamed with the right electronic face, it could seem almost like a traditional watch.  The operative word is “almost”.  Its brush aluminum sides and round glass face might fool you at a glance, but the bulkiness and flat sides definitely give away that you didn’t buy it at Tiffany.

Motorola even did a great job with the watch face – or should I say faces – because you can choose the look of your watch, much the way you do when you choose between a Bulova, Rolex and Timex.  It may come with one watch face showing, you can easily program it with another, including a variety of digital or traditional analog faces as well as fancy & fun faces that are available for download.  I chose a discrete analog black face with second hand.  (I thought it was classy.)  She chose a face that changed from time to time.  Last time I saw it on her wrist, it looked like a kaleidoscope, with the glass shards changing as she moved the watch.  Hers were definitely more fun. 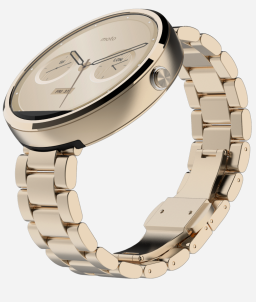 In some ways, the Moto 360 is a fashion statement

By far, the coolest feature that we found was quite by accident, when my daughter tried using her camera on her Moto X Android phone (which was paired at the time with the Moto 360) and realized that when she opened the camera, it changed the face of the watch.  With a little experimenting, she realized that the watch could be used to control her camera like a remote shutter switch.  So she can set up her phone away from her, scoot into position away from the phone/camera and take a selfie by touching the watch.  This takes the concept of selfies – already tremendously popular – to a new level, because you can be part of a wider view, doing group pictures without having to hold your smart phone to take the pic.

At night, simply lay your phone on its side on its charger, and it automatically turns into an alarm clock.  By default, it has a soft glow that is easy at night on your night stand.  So it’s working for you even as it charges.  Nice touch, implemented to perfection. 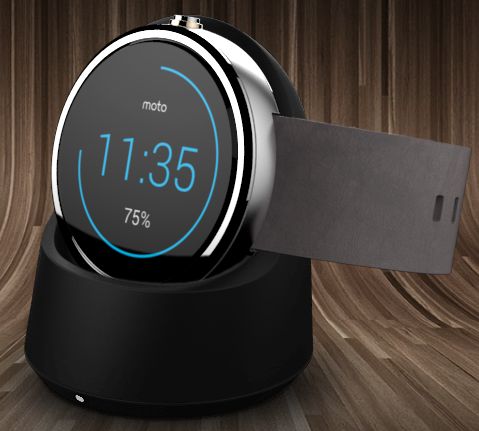 The Moto 360 as a low light alarm clock. Great for your night stand

We can’t talk about wearable devices in 2015 without talking about health – and the Moto 360 is no exception.  I didn’t get a chance to put this through its paces, but noticed that it tracks my steps consistently.  Veronica complained that it tracked 50 steps while she was laying in bed.  It has counters for heart rate as well.

40 years after Dick Tracy coined the term, wrist communicator, it’s about time that we finally have one we can use.  You feel a soft vibration on your wrist whenever you get an incoming text or voice call.  This is very helpful because it makes inbound messages less disruptive than when you rely on your phone alone.  After all, you can see who it is (and the text message) with a subtle, perhaps unnoticeable flick of the wrist instead of pulling your phone from your pocket.  But the implementation has the definite feel of a first generation technology

For one, you can’t answer the voice call on your watch.  If you want to take the call, you have to grab your phone – although you can touch the watch to pick it up.  So you can end up making your caller wait, thinking you picked up although you spend minutes searching for the phone that has actually picked up.

For another, with texting, you can’t respond to the incoming text.  You have to start a new text – not bad in itself, but different than what you’re used to.  And you can’t see 2 messages that come in simultaneously before pulling out your phone.

Sending a text is easy – a swipe on the face; then touching the face as if pushing a button will prompt you through the process– which has you dictating the recipient and the message into the watch.  But you have to put your eyes on the face occasionally; so don’t expect to use the Moto 360 to text while you drive.  It would still be quite dangerous.

The Usual Stats and Caveats

I was surprised when I opened the box and found no instructions – which means Motorola is confident that the Moto 360 is easy to use.  And it is for basic features – but I’m still not sure what advanced features are available.  For instance, Veronica happened upon the camera remote feature after a few weeks; and I wouldn’t have known about it if she didn’t find it.

After a few weeks of use, the battery time looks like it will generally last a whole day – as long as you’re not constantly doing google searches, keeping the face lit constantly or using advanced features.  With the charging-stand clock feature, it’s unlikely you’ll need much more – unless you do very long days and don’t have the charger available overnight.

The biggest concern I found was that over the course of 5 days, it needed to download software updates five times, each time making the Moto 360 worthless as a watch while it was updating.  There’s got to be a better way to do this.  (Keep in mind, we’ve been saying this about Windows Updates for years.)

You’ll notice also that this review doesn’t compare the Moto 360 to the Apple Watch.  That’s because each device works within their own technology sphere of influence.  If you use an iPhone, don’t even think about buying a Moto 360; and if your phone is Android-based, you won’t be able to use an Apple Watch.

The Moto 360 starts at $249 with a leather band; costs $299 with a dark finish stainless steel case and 23 mm metal band; and will run you $329 for the one that looks most like jewelry – the one with light finish and thin 18 mm slim metal band.