Blackberry Camera Has Feature Whose Time Shift Has Arrived 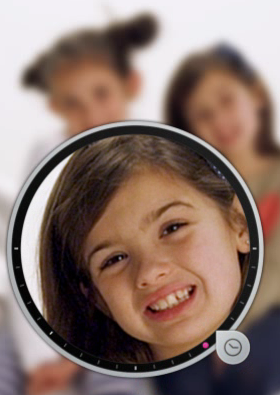 Group photo time!  Get everybody together – ready? Smile…>>click<< “Ah Dad! You got me with my eyes closed!”

Sound familiar?  If so, you’ll be interested in a cool feature in the Blackberry Z10 called “Time Shift”.  With time shift, you can take a photo of a group; then adjust the photo so you catch everybody just when they looked the best – even though they’re all in the same photo?  As the name suggests, it’s as if you are able to time shift a few seconds for each person in the photo.

Here’s how it works:

So far it’s all familiar; right?  Until you want to time shift…

For the next step, select the face that looks not quite the way you want.  Time shift mode will pop up a circle with a control that you can drag left and and right.  As you drag it left, it steps back in time to the few seconds before you snapped the photo – or right to go forward in time.

Now you can get the perfect look on the face you’ve chosen and keep that look in the picture – instead of the one that was showing when you snapped the photo.  Do the same thing for subsequent faces until they all are perfect.

This is a truly remarkable feature that could change the way you take your photos.  In essence, it is taking pictures even before and after you snap the shutter, and lets you edit in place right after you take it.

No more closed eyes, runny noses or turned heads.  Everybody is happy because you don’t have to choose the pose in which one person was ready but the other was not.  Why didn’t somebody think of this years ago?

The scoop:  I was testing the Blackberry Z10 on VerizonWireless Network.